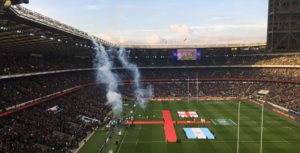 My favourite sport at school was rugby. “All sports are teamwork, but rugby particularly is about teamwork and I think teamwork is the essence of this.” Gordon Brown PM. I agree with him and after a busy two weeks of Local politics on Saturday I went to watch England v Argentina. We won with 14 men to make it 13 in a row  in a battering and physical performance. 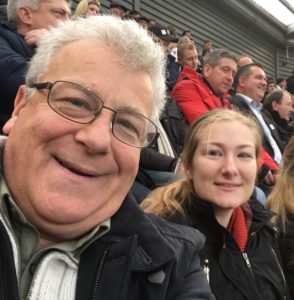 I took my daughter Rachel to her first match, she is at University in Twickenham, and it was a bit of a shame that the action always seemed to be at the other end and even an England supporter like me could hardly claim it was an exciting free flowing performance. I gave up trying to explain the continued scrum resets towards at the end of the first half and used to play “Hooker” in our school matches. (Glad now my Mum made me wear a scrum cap although I thought I was a bit of a cissy at the time). The match, to be honest, was a bit of a slug between the forwards so not very pretty.

It feels a bit like that at Tandridge looking back over the last two weeks I have attended four out of six of our Local Plan “drop in sessions” on our Sites consultation with different issues, very much location related. A general acceptance that house building is required to try and stop the every rising house prices and affordability gap but always good reasons not to do it in a particular area.

At a session of English District Leaders, Gavin Barwell, Minister for Housing & Planning has asked District Leaders in our Communities to make the moral case for building the homes we need. Well I am trying! He stated that building more homes is his number one priority. There will be a comprehensive white paper next month on building and planning. He made clear that Districts that ducked the tough decisions to build houses, to meet need, would find that the government would step in.

On Monday went to Crowhurst Parish Council Meeting to discuss the Local Plan and faced some hostile questioning. Clearly issues around lack of high speed broadband in our rural communities. Discussion centred on Local Plan with concerns about lack of infrastructure and green belt protection but some acceptance that we need to build affordable housing and to arrest the rising affordability gap by increasing supply.

Tuesday at Caterham for their “drop in session”, not surprisingly I discussed the flooding issues with residents.

On Wednesday evening we held one of our regular meetings between Parish Councils TDC Chief Executive, Louise Round and myself.

To set the scene we shared some of the graphs that Gavin Barwell, Minister for Housing & Planning presented to District Leaders last week covering the affordability gap between average earnings and average house prices.

One stark statistic is that 55% of thirty year olds were homeowners in 1990. That figure today has fallen nearly in half to 30%. This is due to the fact that house prices compared to average earnings has doubled in England from below 4 to nearly 8 today. Tandridge is 14!

We had a really good Q&A session on the local plan and merits of Parish Councils preparing their own neighbourhood plans. I was warmly thanked for answering their questions openly. The fact is this process is crying out for genuine open minded debate.

We had a Council meeting the previous Thursday and have posted my speech and also attended a Surrey Leaders meeting this Thursday trying to catch up on the Autumn statement on route to the venue at Epsom & Ewell. We discussed our waste management strategy, joint working and Three Southern Counties (3SC) devolution which seems to be running out of steam.

The sticking point for 3SC is the Government insistence on a Local Mayor but personally I am much more interested in the increased infrastructure investment this model could bring to Surrey & Sussex. A £6b shortfall has been identified and we could lever in additional funding if we form a top tier joint authority.

Finally up to Caterham Valley for the by-election result with the seat retained by the Lib Dem which was a disappointment for our Local Candidate Paul Shipway and his hardworking team.

Friday morning attended formal Local Committee of County Councillors which we will be joining in December to brief on the Local Plan and Community Infrastructure. I stayed on for update on Highways forecast spending budget which faces a significant cut back compared to previous years.