At the Palace of Westminster this week and met briefly with Kevin Barwell Minister for Housing & Planning and Sam Gyimah our MP to discus the Local Plan. Sam later gave us a back stage tour of the Houses of Parliament, the Queens Room, the Commons, Members Lobby and Speakers Chamber. There are some magnificent statues and paintings, but also buckets placed to catch leaks! No wonder £3b needs spending on restoration works. This picture taken from the  Courtyard is the right way up in the blog but rotates on the Facebook page!

Last Monday I went to the Caterham Ward briefing on the next Local Plan: Sites Consultation. I have already been to my own ward briefing. All of these are advanced briefings for local councillors on the current progress on the Local Plan and in particular how the Green Belt site assessments have collected detailed evidence within our various wards. It is hoped these briefings will help councillors when they are asked questions about the Local Plan by residents.
All the documents and supporting evidence have now been released ready for the Planning Policy Committee on 31 October.

On Tuesday I met Nick Skellett to talk about how Surrey County Council and Tandridge could work better together. The direction of travel is towards more joint working and we agreed we would refresh the Local Committee, with a view to bringing a joint committee approach to Resources next year. Six district councillors and six county councillors meet to discuss and decide issues which relate to both councils.
In the evening I attended a finance meeting, which felt a bit odd as I was not chairing it! Simon Ainsworth who was previously my vice chairman is now in this pivotal role and has many strengths suited to the position. He formally worked for the Bank of England and recently moved into a senior role in the private sector. As with many councillors, he has to balance his role as a councillor with the demands of his professional career and raising a young family.
The presentations indicated the financial challenges to generate £1m in savings each year over the next three years due to government grant cuts.
We have a financial strategy to meet these challenges which revolves around changing the way we work, streamlining our processes and generating more income, while ensuring we continue to provide the quality of services our residents expect and protect the most vulnerable in our community.

I was at the Palace of Westminster on Wednesday. Peter Bond, Keith Jecks and I, met Sam Gyimah our MP to discuss the Local Plan. We also met briefly with Gavin Barwell, Minister for Housing & Planning, who managed to fit us in between two ministerial meetings and a commons division! He certainly was well briefed on Tandridge and we spoke with some candour on current issues. 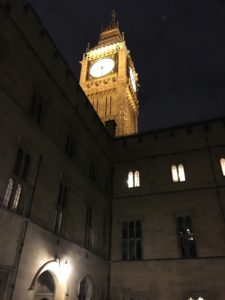 We were lucky to be given a back stage tour of the Houses of Parliament, the Queens Room, the Commons, Members Lobby and Speakers Chamber. There are some magnificent statues and paintings, but also buckets placed to catch leaks! No wonder £3b needs spending on restoration works. 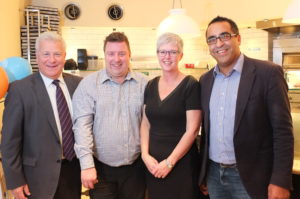 It was off to Caterham on Thursday for the opening of the BID (Business Improvement District) vote. Over 90% of the business community who voted elected to form a BID for Caterham. Caterham businesses will now pay an additional amount, alongside their business rates, which creates a fund to be used to provide enhancements to the town centres. Congratulations to business leader Andrew Browne, BID manager Sue McGeown and one of our officers Belinda Purcell. This follows on from the successful BID process in Oxted last year, which has already seen some great initiatives as a result.

We gave a press briefing on the Local Plan: Sites Consultation on Friday to Kevin Black from County Border News and Julia Church from the Caterham Independent. They received the first part of the briefing given to ward members and we had a good hour of questions and answers. It was a really good exchange of views.
I left the hard working Planning Policy team working late finishing off the final pieces of the paperwork needed for the consultation, as I went up to Caterham for a local ward meeting to select our district candidate. Councillor Beverley Connolly is our very passionate Branch Chairman and we have selected local businessman, Paul Shipway, to be our candidate. He has a lot of local knowledge and his wife is on the Parish Council.
We heard from Sally Marks, the current Chairman of Surrey County Council, who is standing down next May as a Councillor, after many years of service to her local community. She will be replaced by Michael Cooper who has been doing good work chairing the Caterham Town centre group looking at revitalising the town centre.
And so back to the next stage of the Local Plan, which has just begun. We hope the Planning Policy meeting of 31 October will give the go-ahead to an 8 week long Sites Consultation. Each site has been through a landscape, ecology and other assessments to look at whether it could be developed or not. As a result sites have been identified which:
• Could be realistically developed.
• Cannot be recommended for development
• Need more investigation before a decision can be made either way.

The Sites Consultation will include evidence which can be used to protect the Green Belt in the long term. It will:

• Not allocate any land for development.
• Not change the boundary of the Green Belt.
To be kept up to date with the Local Plan preparations and consultation people can: