The Council is delighted to learn the owner of the former Rose and Young garage site in Caterham and Clarion Housing Group (CHG) have exchanged contracts for the sale of the site.

Clarion Housing Group is a company committed to providing affordable housing. They have planning permission for 48 dwellings, with a supermarket on the ground floor. The exchange of contracts is a significant step forward in the Council’s ambition to get this valuable town centre site back in use and contributing to the town.

The Council will be monitoring the progress of this scheme carefully and is fully committed to securing the timely redevelopment of the site. At this week’s Resources Committee it was agreed that if insufficient progress was made by CHG, the Council will take any necessary action to ensure redevelopment takes place, including using another compulsory purchase order.

Councillor Simon Ainsworth, Chair of the Resources Committee, said: “The exchange of contracts between the owner of the Rose and Young site and a major house building company is very much welcomed and a major step forward. We and Caterham residents have been waiting a long time for the development of this site and we will continue to do everything in our power to ensure development progresses. At this stage we don’t think we will need to use a compulsory purchase order, but we remain in the best position to serve another one if it is needed.” 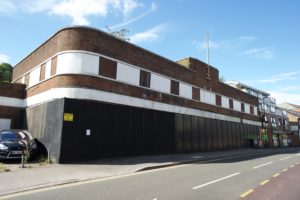 We welcome the Government publishing a housing need number that is transparent and based on a standard methodology. By having a clear number, it will put a stop to disputes between planners, developers, local groups and residents and help alleviate the “inter-generational betrayal” referred to in the House of Commons by Sajid Javid, Secretary of State for Communities and Local Government. However, we don’t agree with the arbitrary uplift for affordability which takes the housing number significantly higher and we will be opposing this allocation through the consultation with the Government.
It is worth noting that the Government number is much higher than the figure Tandridge Council is working with, which residents’ groups have been disputing. However, if we follow the line of an unrealistically low housebuilding number, then the District will be put at risk from speculative development and we will lose control as the Government will decide how many houses are built and the developers will decide where they are built. It will be open season for uncontrolled housebuilding throughout Tandridge with no infrastructure gain.
We are well aware that house prices in Tandridge are completely out of reach for the young and those on average earnings. House prices are 14.8 times average earnings (compared to 7.6 times nationally), which means our young are being forced to leave the District, giving us an ageing profile. It is a real issue that we are currently unable to provide homes for teachers and health care professionals – the necessary inward migration that we desperately need – but also for our local young people.
Our preferred strategy of a sustainable Garden Village will give us real infrastructure improvements with new schools, a health centre and improved transport links plus control over the mix of housing that will be built, so that we can provide new homes for the next generation whilst also protecting the character of the area. We have said that the Garden Village will consist of around 4,000 homes and take away about 1% of our 94% Green Belt. Contrary to claims made, we have been the Party that has successfully defended the Green Belt to-date and continue to believe that we can find the right balance between providing much-needed housing while also at the same time not concreting over the whole District.
This consultation reassures us that the approach the Council has agreed upon in developing a Garden Village strategy is the right one for our area. It will give us control over where homes are built and also bring the necessary infrastructure benefits for the District as a whole. We will continue to focus on what the evidence says so that our Local Plan is robust and stands up to scrutiny when the Government Inspector reviews it next year.
Martin Fisher
Leader of Tandridge District Council
Conservative Councillor for Oxted North and Tandridge
cllr.martin.fisher@tandridgedc.gov.uk
20 September 2017

The government consultation documents can be found at:- www.gov.uk/government/consultations/planning-for-the-right-homes-in-the-right-places-consultation-proposals

Application for gasholder re-development to be submitted by September

The proposal for the new development for the gasholder site in Oxted was presented to councillors this evening by developers, St William. Achieving the removal of the gasholder is one of the Council’s key priorities. A planning application is now expected by the end of September and if the scheme is approved, work to bring the gasholder down will begin in summer 2018.

The development is likely to include 77 apartments, a mix of 1, 2 and 3 bedroom homes which will be situated in two, five storey buildings on this redundant brownfield site. There will be 105 parking spaces for the new apartments and the site will benefit from quality landscaping. The apartments will be accessed from the entrance opposite Boots on Station Road East.

The plans have been drawn up following two rounds of consultation with local residents. Initial feedback was sought during the RegenOxted Consultation in May, which was followed by a targeted consultation from St William including exhibition events on 6 and 8 July.

In total, 172 residents attended the two events in July and 49 feedback forms were submitted. The comments covered a range of topics, with the majority expressing support for the site redevelopment. Full results of the consultation will be available to view shortly when the planning application is submitted. St William has been working closely with the Council to address all the feedback received and has held four pre-application meetings with planning officers.

Martin Fisher, Leader of Tandridge District Council, said: “I am delighted to see plans which will achieve the removal of the gasholder progressing and I have personally had a number of meetings with St William to drive this project forward. The proposals for the gasholder site will soon be available for residents to view and comment on when the planning application is submitted. If approved, the development which benefits from a central location and good transport links will provide an attractive residential opportunity for local people. The new development will also contribute significantly to the vibrancy of the town.”

More information on the project is available to view at www.oxtedgasholder.co.uk.